A band of scoundrels brave the traps & puzzles of the gauntlet.

Sitting in the basement of the tavern, Kajn holds the scrap of parchment bearing a map to the gauntlet. He’s going to ask the rest of the scoundrels, but he already knows the answer. The treasure would be enough, but some of them were adrenaline junkies and liked the danger. Like that Jack Christ, he was a curiosity that annoyed him to no end. Always blabbering on half drunk, talking shit, and constantly getting the party into shenanigans. And that was when he wasn’t trying to be annoying; often he was busy pulling “pranks” that were more dangerous than funny. Felina was always up for some fun… when she was around. Samurais and barbarians tended to have a habit of following, so they’d be in. If his buddy Arcadian were here, he’d also be in. Kajn hadn’t seen him much since they’d arrived in Sasserine, and even when he did he refused to say where he’d been.

“Do you guys wanna run this Gorgoldand guy’s gauntlet and get that treasure?” Kajn asked already knowing the answer. A series of nods and no argument meant it would be their next endeavor.

He couldn’t remember where the map came from any more, only that it way to a treasure stash in a cave network known as the “Gauntlet”. No other details, only that treasure waits at the end. They may have procured the map anywhere; in some stolen goods, in a previously found treasure hoard, buried in their own stash, maybe the tavern keeper?

He was the only common link they all shared, the tavern keeper. His basement was like an orphanage for the worst kind of scoundrels. It was a good deal for all involved: they got to come and go freely from the basement and had access to food and drink above; the bartender was ensured with a steady flow of coin (legitimate and not), access to rumors and the black market, and some measure of protection. They were after all in the slums of Sasserine, one of the worst and most dangerous areas.

Before long they set off for the Gauntlet. It’s location wasn’t exactly public knowledge, but it wasn’t much of a secret either. It was almost a right of passage for many rogues to seek out the gauntlet and run it. Few debate the prize at the end, and even fewer have won it… and stayed alive to tell.

Following the map eventually leads to the top of a cliff overlooking a large lake. A metal piton hammered into the stone near the edge of the cliff gives silent testimony that others have been this way before, although the rope is missing. A narrow cave, the entrance to Gorgoldand’s Gauntlet appeared to be about sixty feet below. 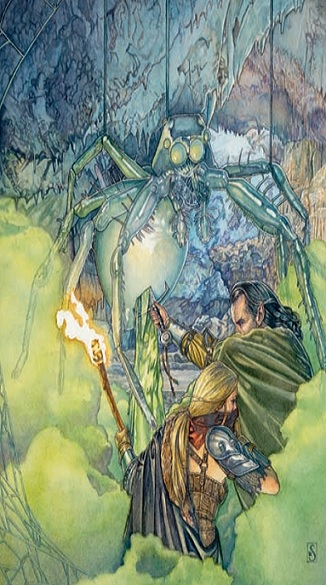 Descending with little trouble, they enter the gauntlet, essentially a network of caves. The first trap was laughably underwhelming: A thin, frail rope looped into a snare, with the words “Put Fut Her” scrawled on the ground. No one triggered the trap. As they crossed the room though, a “spider” leaped from the ceiling. Or rather it hung from the ceiling, where it was stabbed. Instead of blood, a noxious green gas poured forth, revealing the artificial nature of the spider trap. It seemed that other than the scurrying and chittering that can be heard in the darkness, always just out of site and stopping whenever they investigate, there was little worry in the gauntlet.

After clearing a chasm over an underground river, they entered a room divided by a scalable wall about eight feet high. Climbing over it, they were met on the other side by a rust monster! Dissolving weapon after weapon as the barbarian attacked, they slayed the creature after binding it with rope.

The next room contained a long grid, clearly some of the squares trapped and some safe. Sending the rogue in first, their assumptions were assured when he would step on the wrong one and end up paralyzed. The wandering ronin Kamui embarrassed them all when he cleared the grid untouched, leaping and twisting from safe square to safe square by chance alone.

Beyond the grid room they found a door, and beyond that a narrow corridor. Unlike the rest of the natural cave network seen so far, this passageway is carved into the rock; the floor, the ceiling, and walls are smooth. Each of the ascending steps has a single word engraved on its front face; the words all glow slightly, making them easy to read even in the gloom of the corridor. Solving the puzzle easily they were rewarded with the door to an armory… of sorts. The weapons mounted on the wall ended up being the key to the room’s puzzle, as did the skeleton statues in the room beyond.

Their reward was the hoard of Gorgoldand. a nice pile of coins and gems, deep enough to hold a golden longsword standing upright in it.

The golden longsword began to float and the pile of coins and gems swirled into the form of a dragon, with shining red rubies for eyes. It attacked the scoundrels, fighting to the death, at which point the coins showered the floor along with the clanking longsword.

They claimed their prize and exiting the gauntlet (which looped back almost like a question mark) set off to return “home” to the Plucked Parrot Inn.

Into the Dwarven stronghold