A chaotic and panicky rogue.

His actions are as unpredictable as his motives. 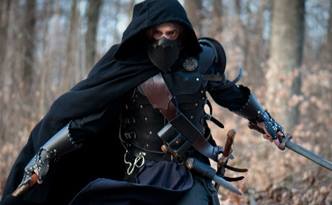 “So I’ve been sitting in the Thay prison, deep in the underbelly of the shadowborn district for a few hours now. Who knew it was in bad taste to ask a barmaid if she could handle a cock the size of a purple worm?”

Originating in Thay from the union of a low-born mother, Kajn Necrosil sharpened his skills in the streets while still very young. Kajn barely remembers his father, whom disappeared out of his life at a young age, forcing him to steal to provide food for himself and his mother. Things went from bad to worse when an evil red mage assassinated the King of Thay, and cheated his way to the throne. Power hungry, the new King hunted and slayed any magic caster in the entire kingdom unless they worked only at his will. He also created a sport out of gladiators fighting against average poor patrons living in the slums of Thay. One day, Kajn’s mother was drafted by the King himself. A young Kajn attempted to defend his mother, and threw a smoldering cauldron into the King’s face, scarring it perminantly. Kajn and his mother were ascended in cages deep in the Thay dungeon. Kajn was forcefed three times a day with nothing to drink but alcohol, while his mother was starved to death before him. Once his mother was dead, the dark elf King of Thay humiliated Kajn by forcing him to be his personal jester in order to stay alive. Kajn scrapped little money together pick-pocketing patrons of the Kings quarters during his performances, and paid off several civilians in the city to assist in his future escape.

Eventually indentured as a Jester, he is a very loyal companion despite his roguish demeanor. This profession has lingered into his adulthood, resulting in a barrage of pranks aimed at his unsuspecting party members.

Kajn now travels wherever the wind takes him. Fleeing from Paladins and thee king’s hired hitmen. Kajn vows that one day he will be strong enough to return to Thay to destroy the king, and avenge his mother.